View from the Tower: a powerful symbol

When a title pops up that includes a powerful archetypal symbol like the tower, I pay attention!

View from the tower

When I begin a painting, I don’t usually have a theme or subject in mind and start instead with an impression—some pattern, colour or shape just outside my field of vision—that won’t leave me alone. While no doubt every work is infused with something that originates within my psyche, this is often unconscious and doesn’t always come through to the light. It’s only when a piece is finished that I can look at it and perhaps ascribe meaning. And this doesn’t happen every time.

However, when a title pops up that includes a powerful archetypal symbol like the tower, I pay attention!

I started “View from the tower” this year at the beginning of the Covid-19 shutdown. I was experiencing the same emotions as most people – anxiety at separation from loved ones, financial worries, and incredulous horror at how quickly the need for compassion and rapid response on a global crisis turned into a free-for-all of racism and exploitation for political and economic gain. When working on my artwork, however, I was blissfully analysis-free and just head-down in the zone. Along with copious snacking and long naps, this approach helped many months pass quickly.

After putting the piece away for many weeks, I took it out still un-named, to add finishing touches. Seeing it with fresh eyes, it felt I was looking down from a great height, perhaps from a tower. “View from the Tower” popped into my head and seemed to fit. From my self-isolation in the “tower” of my sixth-floor condo, I’d had months to reflect on the forced slow-down of social interaction, work and the economy. I began, like many others, to experience the positive effects of time and space, rarely present in hectic schedules, a pause which allowed us to look within, both individually and collectively.

Symbols can be useful as a leaping-off point to finding meaning in life. I was drawn as a young adult to the theories of Swiss psychiatrist and psychoanalyst Carl Jung, the founder of analytical psychology, and more recently to the archetypes of the Tarot. Both the Tarot and Jung’s work explore the world of symbols as a window into self-knowledge. And the tower is a powerful symbol in both.

The tower card gets a bad rap and no one likes it when it turns up in a Tarot reading. In the traditional Waite-Smith deck, the image shows a tower hit by lightning and exploding with fire. A man and a woman leap from the tower head-first, plummeting to certain death.

One common interpretation indicates upheaval and extreme situations that will explode if left unaddressed. However, another interpretation is that the pain experienced from difficulty can lead to freedom—whether it be personal freedom when we shed old beliefs and behaviour patterns, or at a societal level, as unrest leads to the shattering of long-standing attitudes and situations and paves the way for something new.

As the Tarot archetype of the tower encourages us to go deeper into what the symbolism of the tower might mean to us personally, Jung’s work provides some insight into the tower as a symbol for the self-isolation necessary to be present and hear our inner voice.

While Jung did not devote much time to study symbolism in the Tarot, his exploration of archetypes reveals that the tower played an important role in both his work and his life.

Jung built himself a tower/house in Bollingen, Switzerland into which he would retreat for months at a time. Some of Jung’s writings from these periods of withdrawal reflect the timeless quest for personal truth, and mirror sentiments that have surfaced amongst many of us during our forced periods of quiet since the shutdown began.

Philosopher and blogger Morgan Mussell has written about Jung’s quest for a simplicity necessary in order to explore his own inner life. In his excellent 2014 blog post Jung’s Tower: simplicity and the inner life, Mussell delves into Jung’s views on the busyness and absence of mindfulness in modern life. Mussell quotes from Jung’s autobiography, Memories, Dreams, Reflections, in which Jung states: “… we no longer live on what we have, but on promises, no longer in the present light of day but in the darkness of the future, which, we expect, will at last bring a proper sunrise.” Something many people are discovering now that they’ve been forced to slow down. There is no certain tomorrow, only today.

Mussell lists a number of ways to “unplug” and find the things “that center us and we are drawn to”, such as writing and engaging in visual arts or crafts, both of which have always worked for me. And while at time of writing in 2014 Mussell states “we don’t need a tower to live in for months at a time” in order to find  ourselves, recently most of us have had the slowness of isolation—the tower—forced upon us, whether we felt we needed it or not. Sometimes welcome, sometimes challenging, there is no doubt we will emerge changed, both as individuals and as a society.

Since Jung’s death in 1961, Tarot experts and Jungian scholars such as Rose Gwain and others have applied Jung’s system of archetypes, the psyche and psychological types to the archetypal system of the Tarot, revealing a rich tapestry that can be used to delve deeper into what makes us tick. According to Gwain in her book “Discovering Your Self through the Tarot: A Jungian guide to archetypes & personality”, archetypal symbols “tell us exactly what we already know but have not yet allowed our conscious minds to confront.” The tower, she states, “represents the crises through which our egos must pass in order for us to grow.”

Would I have felt differently about my forced isolation six months ago, knowing what I know now about how events would unfold and with this “tower” insight? Perhaps. But it’s beside the point. Living “in the present light of day” helps me move forward despite the confusion and uncertainty. “View from the tower” could be my unconscious offering me a map, itself a symbol, that shows glimpses of what is possible and what might come. I can take the next step, without knowing the full path to get there.

Note: Please refer to the references below for more information. And a sincere apology to those much more knowledgeable about Jung and the Tarot than I, if I’ve gotten anything wrong.

Rose Gwain
Discovering Your Self through the Tarot: A Jungian guide to archetypes & personality
https://www.amazon.ca/Discovering-Your-Self-Through-Tarot/ 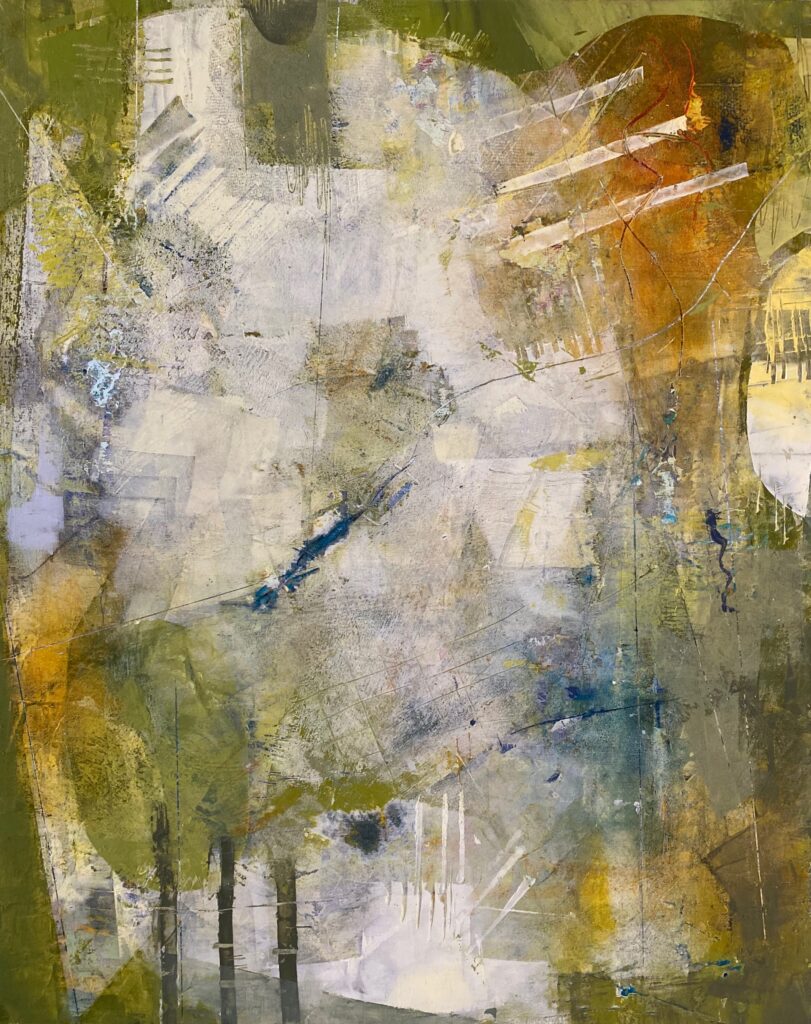 View more of my work

“How did you do that?” Some musings on the creative process …

When viewing my work, people often ask about my creative process. How do I decide on colours? How do I achieve depth? How can it look textured yet be smooth to the touch? How long does it take to complete a painting?

I don’t think too much about what I’m doing when I’m doing it, at least at the beginning stages. Sometimes I’ll be inspired by a landscape, person, object or image, or the texture of something I see. Whatever it is, I try to let go and bring the emotional energy—the feeling it evokes in me—into my work. This isn’t always a conscious act!

The first stage is pure play, putting down marks and colours with abandon, sometimes adding collage paper and other media. As I work, I add layers, let them dry, sand, glaze, scratch, and gouge into the surface. As the layers build up (sometimes as many as 20 or more by the time I’m done) certain elements start to emerge that define the piece.

The later stages of a painting are the most challenging and can take quite a while. What does it have, and what does it need? Is it balanced? I spend time contemplating a piece before adding the final touches, sometimes putting a painting away out of sight for weeks or even months before coming back to it with fresh eyes.

Here are just a few of the stages of this mixed media piece “High Road” from near the beginning, to the finished work. 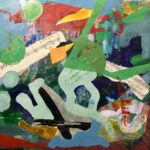 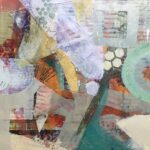 Want to learn more? I highly recommend checking out Pamela Caughey at www.artandsuccess.com and Gillian Lee Smith at www.gillianleesmithartschool.com . I am greatly inspired by the work of these two talented artists and teachers, and have learned a great deal from them.